Fort Pierce Police Detective Samuel Cooper has never lost his focus on what he wanted to do for a living, where he is headed in his career, or what he needs to do each day as he investigates robberies, shootings, rip offs and homicides throughout the city.

He became a police officer eight years ago, specifically choosing Fort Pierce because he wanted to be “where the action is,” he says, and he knew Fort Pierce was a place where no two days would ever be the same. He wanted to experience all aspects of police work while working with people from many walks of life.

While Fort Pierce has just 48,000 residents, it is a diverse city with a mix of people from many nations, income levels and lifestyles, and with neighborhoods that are urban, rural, beachfront, suburban, industrial and commercial. And that means a detective in Fort Pierce must sort through a limitless variety of crimes, people and circumstances to be effective as an investigator.

Detective Cooper says he feels a sense of satisfaction knowing he plays a role in lowering the city’s crime rate, making the community safer and getting the bad people off the streets, even though it means he sometimes has to deal with tragic and emotional situations. As an example, he cites a shooting he investigated in 2015 with his fellow detectives, leading to the conviction of two suspects who shot a woman in a parking lot. The shooters used their car to block the woman’s car from leaving the area as they opened fire on the victim. 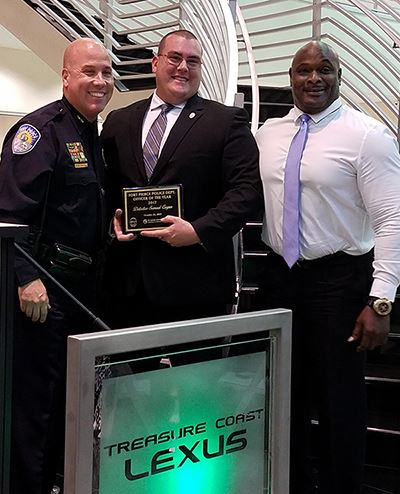 He said it was personally rewarding for him to see the case through to the end and get the convictions of two dangerous people — it’s what he likes best about being a detective. He said he enjoyed being a patrol officer earlier in his career, but often he would respond to calls, help victims and uncover clues, but never get to hear the outcome of the case after leaving the scene for the next call.

Another thing he likes about being a detective is the excellent crew he works with in the department’s Criminal Investigation Division (CID). Detective Cooper says he can rely on the knowledge and assistance of his fellow detectives, who share their expertise with him as they help each other consider all aspects of a case.

“They are supportive, and together we always go 110 percent when we get a case,” Detective Cooper said.

His supervisor, Lieutenant William Hall is especially impressed with Detective Cooper’s ability to uncover information from a variety of sources. “His research skills are phenomenal and he really knows his job,” Lieutenant Hall said. “He’s a methodical investigator with great computer skills and an ability to match up names, find phone numbers and dig deep for the information we need.”

Lieutenant Hall said Detective Cooper has become a leader in the CID, training new detectives who are now doing really well as investigators. “He is passing on his knowledge, and that is a big benefit for the Fort Pierce Police Department and for our community,” Lieutenant Hall said.

On a recent homicide, Detective Cooper’s research skills were a great asset for the investigative team because he was able to sort through phone logs and determine who was associating with the victim in the weeks before his death. That information led to a suspect and eventually to an arrest.

And on a recent case involving the hacking of a social media account, Detective Cooper wisely recruited the assistance of an equally technology-savvy patrol officer to determine how the hack was accomplished. As a result, they were able to instruct several local public agencies on how to better secure their social media accounts from attack.

“He’s a first-class detective and I hope to develop more just like him,” Lieutenant Hall said.

Unfortunately, good detective work alone is not always all that’s needed to resolve cases and get criminals off the streets, Detective Cooper says. He wishes more citizens would come forward with information needed to identify offenders, though he understands why some people are afraid to help out.

“I would tell them not to be so apprehensive about talking to us,” he said. “When we solve a crime, 90 percent of the time it’s because a citizen has helped us, and we need more of that. We really appreciate the people who are trying to make the community a better place.”

For his future, Detective Cooper said there is still more in police work he wants to accomplish. He would like to move up the ranks in the coming years, focusing more on managing people, resources and issues, even though it means he may have to leave his position as a detective to do it.

When he does move up, he will continue to give 110 percent, he said, and he will remain true to his commitment to experience all aspects of police work while serving the people of Fort Pierce.

And because of his steady, focused and skilled approach to his job, the Fort Pierce Police Department is proud to call Detective Sam Cooper “Officer of the Year.”